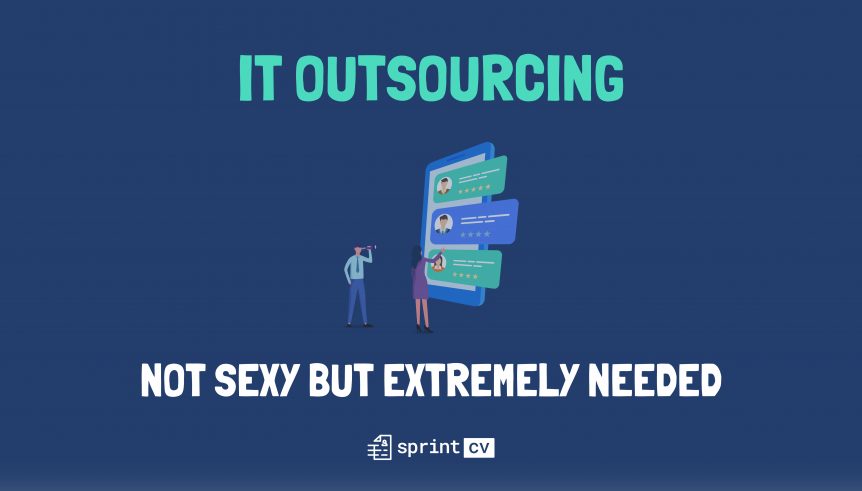 Last week, Gonçalo Sequeira, posted a very good article on LinkedIn – “The reason why Outsourcing will be dead soon” – that was a big buzz. As a consultant myself, working with outsourcing companies for years, I felt the need to share why I think Outsourcing is not doomed and will still be a useful solution to big companies.

My experience as an outsourced consultant

For many years, I’ve worked as an outsourced consultant – first at WeDo Technologies and then at the European Commission – and I can say I’ve had quite similar experiences.

Your colleagues at the client become your friends and your “only” link to the company that pays your salary is, in fact, e-mails regarding salary, holidays, and those kinds of human resources matters. I don’t feel like an employee of the company that I was hired for and there is no need to. Our agreement is very straightforward and transparent: I am a contractor (or freelancer) and I get paid for it. Also, I am also invited to their team building activities, which is actually nice to expand my network.

What is an IT Outsourcing company?

When we talk about IT outsourcing companies, we refer to “body shopping” companies that allocate IT professionals to big clients, not consulting companies that deliver projects or win a bid to take care of the IT department.

To open an IT outsourcing company, you don’t need a big investment at first, just a good network of managers from companies that need to hire external consultants. Nevertheless, just because it’s relatively easy to start it, it doesn’t mean it’s easy to be a reference in the market.

IT outsourcing companies act like a middle-man, where they have consultants on the payroll and allocate them to clients and get a profit for that. On the other hand, they assume the risk in case the client doesn’t want to work with the consultant any more and find them a replacement or a new client/project.

Why do big companies need IT outsourcing companies?

Since they are actually big companies, things are not as simple as we may think. There is a maximum number of employees (headcount) and budgets are decided at the beginning of the year, normally by the CEO and the board of the company. These decisions affect all departments and can cause some constraints in expanding teams, as they are not so agile and, therefore, are forced to hire outsourced professionals.

If you’ve worked in a big company, you probably know how hard it’s to hire a new person. Some times, there is a hiring freeze due to reorganizations. So if a team just got two new projects and needs three more Java Developers to implement it, they will just get them from an Outsourcing company. This is the new trend, as companies want to be as lean as possible. If there is extra work, they expand their teams with outsourcing professionals.

Plus, big companies face cost reductions very often. The only way their managers can keep reaching goals is by hiring external people. Which means increasing the variable costs (OPEX) and keeping the fixed costs low (CAPEX).

In Europe, when a company hires someone permanently, it’s quite hard to dismiss that person in the future, if needed. For big companies, is really hard to dismiss someone and it gives a bad image to the press. Plus, they also have more responsibilities than smaller companies. They tend to have pension funds, more obligations to social security and unions. So, when a big company hires an external from an outsourcing company, they have no responsibility for them, in terms of bureaucratic matters – if they get sick, if they need a replacement, etc – it’s all the outsourcing company’s responsibility.

The trend is for companies to keep their core activity in-house and externally hire everything else. This happens a lot in IT, with big banks asking companies to manage their IT departments, eg. In so many units, the team manager is an internal employee and all the rest of the team is external.

To sum up: the future of outsourcing is not sexy, but companies needed it.  With this crisis, outsourcing companies are the first affected, since they act as the buffer to expand and reduce teams. The future won’t change this, as the current labour laws in Europe defend employees a lot. And, in a world super-specialized, this gives the perfect space for IT companies to exist and thrive.

What are your thoughts on this matter?

Feel free to reach out to our founder on Linkedin or via Email.